Dokapon! Ikari no Tetsuken is a Japanese PlayStation game in the Dokapon series made by Asmik Ace Entertainment. It was made after Dokapon 3-2-1, and it is popular with the Thailand people.

In this game, the King is giving out money. But however the king was fake and thus, transforms into Wallace. The god was the original king, thus he tells the players to defeat all the Wallaces in the game.

In the heck part, if the player accepts the power of darkness, the others must defeat it, before it reaches god. If he/she reaches god, and defeats him a special arena battle begins.

The winner will be the new king, regardless of gender or character. 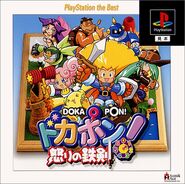 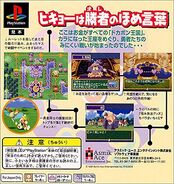 Add a photo to this gallery
Retrieved from "https://dokapon.fandom.com/wiki/Dokapon_Ikari_No_Tekken?oldid=16155"
Community content is available under CC-BY-SA unless otherwise noted.