If you're looking for what adventurers can be controlled by, see Human Players and AI Skill.

Adventurers are the player or AI-controlled Characters who fight Monsters, liberate Towns, and are the heroes of the Dokapon series. In Dokapon the World and Dokapon Kingdom, they are sorted into different Jobs, or classes.

Each character has an unique skill. There are also no jobs in these games.

For the Ikari No Tekken version:

Scop: A young adventurous boy, who sometimes gets angry due to a short temper. He has the same field skill as a hero job. In battle, he can raise his attack.

Urara: A cute girl with healing skills. In battle, she can heal herself.

Burikin: A blue robotic knight with loads of defensive power. In battle he can increase his defense.

Gamamaru: A ninja that can use 2 items at once. In battle, he can place spikes on the enemy.

Molde: A girl who loves to play pranks on adventurers. She can use 2 field magics at once. In battle, magic increases.

Don: Unlike the drum from Taiko no Tatsujin, He is a adventurer who carries a huge backpack. He sometimes uses the GOTO skill in field, and in battle, he thinks about something...

Valtz: A pesky thief who loves tricking people. In battle he increases his speed.

Wiwi: An extremely rare monster who makes a debut in this game. He clones items in field, and runs away in battle.

Just like in Ikari No Tekken, each character has a unique skill only they can use.

Tap: The protagonist from Dokapon: Monster Hunter. He has the same field skill as a hero job.

Luchil: A cheerful girl who wishes to join a dance party. In the field, she can heal herself.

Brikin: Burikin's little cousin. It's unknown if he can recover status.

Gamamaru: The ninja returns with a new suit. It can use 2 items at once.

Razuly: The magic trickster. She can use 2 field magics at once.

Vint: Unlocked after beating story mode. He likes to steal health from others. When selected, the Vint event will not trigger.

In Story Mode, the Adventurers travel through islands to stop Wallace from purging the Kingdom to darkness. They find and defeat the 5 Colored Wallace, defeat monsters, and get special items, like boats, water goggles and wings. However, if an Adventurer is in Last Place for 2–3 weeks in a row, they will begin to hear "whispers of dark revenge", which is a sort-of Field Status that does not wear off unless the player goes out of last place, or they accept Weber the Trickster's offer to "Let the Darkness into your Heart!" and relinquish all G, Items, and Field Magic (except for special items) the player owned at an event or where the player uses a Contract. Using the Item "Contract", the player can instantly trigger a transformation. Doing so, the player will can become the Darkling, which antagonizes the other Adventurers.

Adventurers can have various appearances, depending on the options chosen at the Player Setup screen.

In Story Mode, the Adventurers are usually the protagonists of the story. They liberate and upgrade towns, defeat monsters, and serve the King. However, if an Adventurer is in Last Place for 2–3 weeks in a row, they will begin to hear "whispers of dark revenge," which is a sort-of Field Status that does not wear off unless the player goes out of last place, the player dies which relives it for a short period of time, or they accept Weber the Trickster's offer to "Let the Darkness into your Heart!" and relinquish all G, Items, Field Magic, and Towns (but not Castles) the player owned, at a place in south-eastern Asiana, at a place known as the Dark Space. Using the Item "Contract", the player can warp there. Doing so, the player will can become the Darkling, which antagonizes the other Adventurers.

Adventurers create a character with options of 4 colours and 8 classes, classes are permanent and you can not switch classes after the opening. Your Classes decide your stat gains on level up, your battle skill, and your passive skill.

In Story Mode, the Adventurer's are in function almost the same as kingdom, they're the protagonists, they liberate towns, defeat monsters, serve the king, and can become Darkling.

In Dokapon Gaiden, you play as one of 9 characters, all of which have different Base Stats and starting equipment with the exception of HP.

Human-controlled female magician who likes green with a ditsy face.

AI-Controlled female thief who likes pink with a selfish face. 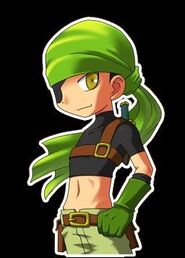 A Green Bandit from Dokapon Journey 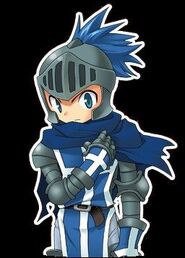 A Blue Paladin from Dokapon Journey
Add a photo to this gallery
Retrieved from "https://dokapon.fandom.com/wiki/Adventurer?oldid=18846"
Community content is available under CC-BY-SA unless otherwise noted.